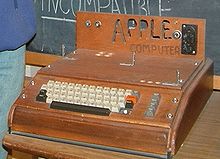 The first Apple was created in 1976 by Steve Wozniak. He has a couple of years to build the first Apple. The board was composed of several parts. A System monitor and keyboard was not delivered. The owner of this Apple itself has a System built to the motherboard and keyboard mount.

On April 1, 1976 have Steve Jobs, Steve Wozniak and Ronald Wayne started the company Apple. The product was called the Apple 1 kit. This was hand made by Steve Wozniak and had a proccesor motherboard, RAM memory and a graphics chip that only simple text could be made visible.The Apple I was put into production in July 1976 was 666.66 U.S. dollars and cost 466.69 euros. Now, this computer cost $ 2572 Euro 1800 should have because of inflation.

Apple was created as a cooperative on January 3, 1977 Ronald Wayne without his share of the company that sold back to Steve Jobs and Steve Wozniak. The multi-millionaire Mike Markkula provided essential items such as expertise in sales and marketing, he borrowed $ 250.000 to the company for a start.

The Apple II was introduced on April 16, 1977, and was definitely different than its competitors because it came with a color graphics card. The competitors were the TRS-80 and Commodore PET with a tape recorder that worked. Apple surpassed those computers with a 5 ¼ inch floppy disk drive.

In May 1980 they introduced the Apple III to compete against IBM and Microsoft.Steve Jobs was right all convinced that all future computers a graphical interface environment needed and he began to develop the Apple Lisa. When Apple entered the market with this they generated more capital than the Ford Motor Company in 1956.

At Apple, most millionaires (300) was born and there is no other company that after she did. In 1978 Steve Jobs to the Apple Lisa project started in 1982 but now he had to stop a team with this company because they are low budget Macintosh took over.

Lisa won the race against competitors in 1983 and became the first personal computer to the public with a graphical environment. Commercially, this was seen as a flop because of the high purchase price and the limited amount of available software.

In 1984 Apple launched the first Macintosh with a television campaign. The Macintosh sold well but sales declined due to the high purchase price and the limited amount of software. This changed when the LaserWriter and PostScript laser printer for a reasonable price was introduced. The Mac was this progressive because the Macintosh GUI.

In 1989, Apple released the first portable Macintosh computer in 1991 and the PowerBook. They were just as powerful as a desktop Mac, but weighed 7.5 pounds with a time of twelve hours on the batteries. The same year, Apple released a major upgrade to System 7 operating system. A color interface and networking capabilities. This was the base until 2001.